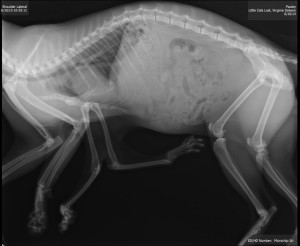 EDMONTON — No, your eyes aren’t playing a trick on you: this cat really does have six legs. Pauly the cat has a condition which affects one in 10,000 cats, according to Dr. Tamer Mahmoud, owner & veterinarian at Edmonton’s Oxford Animal Hospital.

Pauly was first found in the southwest part of the city in late April. He was being taken care of by a few friendly neighbours who eventually contacted Little Cats Lost in June when Pauly started having trouble walking. Little Cats Lost caught him on June 10.

That’s when Pauly’s journey to surgery began. He stayed with Little Cats Lost volunteers for two weeks for assessment after having an initial check-up, and has been in Mahmoud’s care for a few weeks now in order to allow him time to learn to trust the staff at Oxford Animal Hospital before his surgeries begin. In that time he has proven to be very shy.

“He is probably going to be a kitty that is going to need a quiet home with understanding people. Lots of times, kitties like this gravitate to their caregiver and no one else. So, he will probably get into a home where with the right support from us and the right people, he can actually become a good companion for the people in that home,” said Virginia from Little Cats Lost.

In his five years experience as a veterinarian, this is the first case of a six-legged cat that Mahmoud has seen and he doesn’t expect to see another case any time soon.

“This case is very rare; it’s most likely because two kittens were inside the uterus and one kitten absorbed the other one. That’s why this cat has six legs,” he said.

Pauly has been living with the condition for about seven years now and Mahmoud believes that he wouldn’t live much longer without treatment.

“It’s affecting his quality of life…. I don’t think he would make it for too long if we don’t remove these two legs, so by removing these two extra legs, we are hopefully getting a better quality of life for him,” he said.

The problem is that not only does Pauly have too many legs, he also has hip dysplasia and an ascended testicle.

Pauly will need three surgeries in order to begin living a better life, the total cost of which is estimated to be around $2,000. 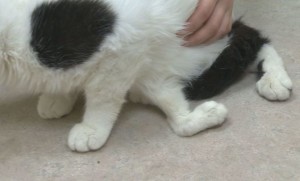 Mahmoud will allow Pauly to return to a foster home after each of the three surgeries are complete in order to help him recover.

“The $2,000 is not going to cover too much. The clinic fee over here is much reduced because we are just trying to save this cat. We don’t want to make money off [him]; we are just trying to save him” said Mahmoud. “Not many vets are willing to take a case like this, so that’s why when they told me they found this cat, I told them, ‘Okay, just bring him here and I can take care of him.’” 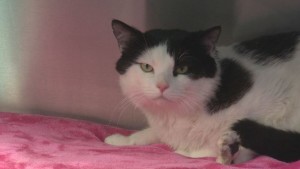 Once the surgeries are complete, Pauly should be able to recover in a minimum of three weeks and be able to be adopted out to a forever home once he has been properly socialized.

Pauly is expected to not require any special ongoing care in the future.

Little Cats Lost, the local animal society that brought Pauly to Mahmoud, has started an online fundraising campaign to pay for Pauly’s care. You can also follow Pauly’s journey on Facebook.